Helping our community make a difference

Questions and answers about printers, software, modeling, and all other aspects of making hands
Post Reply
[phpBB Debug] PHP Warning: in file [ROOT]/vendor/twig/twig/lib/Twig/Extension/Core.php on line 1266: count(): Parameter must be an array or an object that implements Countable

13 posts [phpBB Debug] PHP Warning: in file [ROOT]/vendor/twig/twig/lib/Twig/Extension/Core.php on line 1266: count(): Parameter must be an array or an object that implements Countable
• Page 1 of 1

I'm busy printing the Raptor Reloaded on my new CTC printer (Replicator clone). I'm having trouble printing the fingers without supports because the edges keep curling up as soon as it gets to the overhang (you can see it on the top finger in the picture below). Adding supports fixes the problem, but then I have to cut and sand off the supports, which makes the fingers look ugly.

I think my biggest problem is that there are SOOOO many Skeinforge settings and one or two of them is likely affecting the quality of my prints. I've got the basics down - infill, shells, layer height, speed - but I feel like there are other settings that are negatively influencing my prints.

Does anyone have a set of Skeinforge setting files (CSV files) they can share? 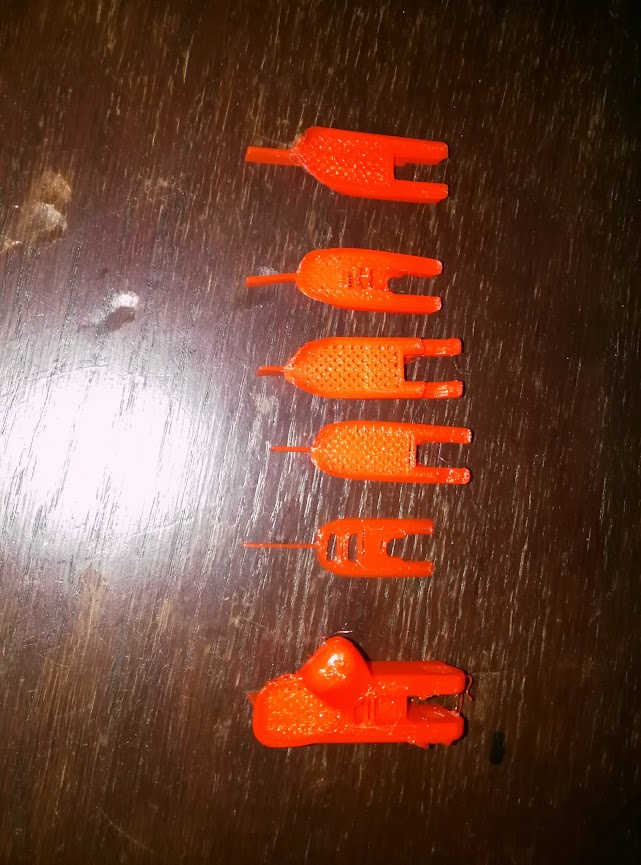 The fingertips on these designs are a challenge to print, because they require a steep overhang, both in the front (the long overhang of the fingertip) and in the back (the curved radius at the bottom of the end of the finger).

I really like making the first layer thick and slow. For example, 150% thickness, and 50% speed, and I calibrate the nozzle pretty close to the print bed, so the first layer really sticks. This sometimes means that I have a little extra material on the first layer, but that's easy to trim off. And, in general, I try to make the temperature as low as possible, so that the plastic is solid as soon as possible after extrusion, which helps with overhangs.

The other thing that helps isn't a software change, it's adding active cooling to the printer. I have a FlashForge Pro (pretty similar to your printer) and when I added http://www.thingiverse.com/thing:537918 it made a world of difference, because it cools the plastic immediately after extrusion so I get much better overhands. And while it sounds silly, if you rotate the print so that the fingertip is towards the front of the printer instead of the back, the print improves because of the airflow.
- Laird Popkin
Top

Do you have a cooling fan over the extruder, that will really help.

Yes I would turn it on after the first layer, you really want the 1st layer to stick !

Going cooler might help, I print at 205 for PLA.
I print in the garage which is pretty cold anyway, you could see if you can find somewhere cooler to put the printer ?

In short your problem is heat, you could also try slowing the print down, that might help ?

I've played around with the various suggestions you've all given. Squishing the first layer does help, but it didn't make a significant difference on the overhangs, which still curled. BUT, I put a floor fan in front of the printer on full blast and the overhangs immediately improved, without changing any Skeinforge settings. So that appears to be my next path to better prints!

Of course, my board doesn't have the Q6 part for adding another fan like the one Laird pointed to in Thingiverse. So now I have to decide whether I'm going to take a swing at soldering it on or buying a new board or hardwiring a fan to the power supply or what. As always, advice appreciated.

lol. I cool my laptop w/ an external fan.

You can also get fairly cheap fans that are USB powered. http://www.coolerguys.com/usbfans.html for example. Then you can power it from a USB power supply, or a nearby computer. And it's easy to plug/unplug the fan from USB so that you cool the PLA prints and not the ABS prints.
- Laird Popkin
Top

This topic is quite old but, as a Skeinforge user of over 2 years, I would like to add something to the conversation.

Skeinforge is a very capable slicer and I rely on it a lot to deliver accurately dimensioned prints which it does very well. It does however have weaknesses when presented with narrow areas to fill and if you are unable to reduce the number of perimeters it will just leave out the infill.

The e-NABLE printing tips request the use of 2 perimeters and this effectively rules Skeinforge out. Cura has a more pragmatic approach to infill and will generally fill narrow areas even when multiple perimeters are required. This, I would say, makes it a better candidate for e-NABLE printers.

I have no doubt that Slic3r can produce satisfactory results. In my experience Slic3r falls somewhere inbetween Skeinforge and Cura in respect of its configurability vs. ease of use. Some of the assumptions that Slic3r makes have caused me problems in the past.

I have sliced the raptor-reloaded parts with both Skeinforge and Cura. Skeinforge requires a single perimeter in order to create completely filled proximals on the initial layers using a 0.5mm line width. Cura can achieve the same result with 2 perimeters at the same line width.

Printing with a single perimeter and Skeinforge's strategy of varying infill with solid, bridging and sparse infill layers produces visible effects on the surface of the print which affect the final print quality. Cura uses a more uniform alternating line infill which, combined with an achievable 2 permieters, results in a better surface finish. Overhangs also print better due to the extra perimeter.

13 posts [phpBB Debug] PHP Warning: in file [ROOT]/vendor/twig/twig/lib/Twig/Extension/Core.php on line 1266: count(): Parameter must be an array or an object that implements Countable
• Page 1 of 1

Users browsing this forum: No registered users and 1 guest